There's a wizard on my lawn

Better than a ghost, I think 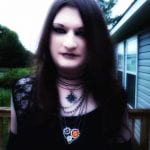 I’ve already made it everywhere else, I think.

The part about the companion short story to Dead Girl’s Ashes, that is.
It’s titled Five of Five, and it’s from Charles’ perspective, set not too long before the events of the first book. In it, he tries not to get himself and Corey killed because of one stupid mistake, and ends up delving too far into his own past for anyone’s good.
Honestly, I think it’s one of the best pieces of fiction I’ve ever written.
You can find it here.
You can also get it for free (freeeeeeee) by signing up to our mailing list, or over on the Patreon. I intend to put out 1-2 of these per main book, partially because they’re a cool reward for people that follow and support us, but mostly because they’re fun, and I wanna get out some bits of the story that just don’t make it into Ashes proper.
Eris knows they don’t sell, after all.
And, if you are merciful and kind, feel free to drop it a review on Amazon, or buy it, or pet it and call it your own. And I do hope you enjoy it.

And now I’d like to talk about something completely different.

I’m not fond of social media.
This probably does not come as a surprise to those of you who know me. As best as my medical professional can tell, I’m somewhere on the autisim spectrum, which in my case comes with a side of crippling social anxiety, among other things. Aside from meaning I’m not much fun at parties, or outside, this means that social media, at its base, is fucking terrifying.

So why have I plastered my face and book cover over each and every social media outlet I could?
I feel like I have to.
On some level, the fact that writing books is, at many stages, more about marketing than books incenses me. I want nothing more than to be a writer. A writer, not a marketer. But most (successful?) indie authors tell you that you should split your time 60/40 or so between marketing and writing. And trad pub? It’s actually worse. Unless you win the lotto and end up as a big fish, they don’t market for you. You still do it your damn self. AND they take most of your money and decision making power.

So, I’m on Instagram. And Twitter. And everything else. Because somewhere, somehow, I need to get eyes on our books.

It’s not like I don’t enjoy interacting with my fans. I love it. But at the same time, I feel like I’m barely functional at it. I’m near paralyzed trying to figure out what (sometimes very simple) statements or social cues really mean. Much less how to make myself understood. In the back of my head, I have a library of responses and their definitions, and I pull them out over and over during a conversation, asking myself “does this mean that? I think it does…but what if I’m wrong?”

So no, social media isn’t very fun. Getting to know someone makes it easier. Understanding someone’s psychology makes it easier. But when I’m interacting with a bunch of strangers/near strangers, none of that is applicable, and I feel like I’m lost in the social wilderness of my own mind.

We’ve all had it happen: we look on Amazon (or wherever) for our favorite categories, and the top pages are filled with smut (not smut shaming, just maybe it should have its own category instead of ALL the categories). And when you find one that’s legit, you pop it open…
…and it’s crap. Barely edited, smells like bad fanfiction, tons of cliches, etc.
Point being, there are really good books low in the rankings. And really bad ones high up. How so? Is there no justice in the system? Why wouldn’t the good ones naturally rise to the top?
Because marketing. A book doesn’t have to be good, it just has to be seen (that’s why several of the old scams worked, too). Which means it’s basically, unless you got your foot in the door and built a following pre 2014 or so, the playground of money or luck these days.

I hate that it’s like that, but it is.
That’s why many indies will beg for likes, follows, reviews, etc. Because we need all the help we can get to even make it onto the leaderboard.

I’ll pack up my soapbox now. And, just to be clear, I’m not just trying to preach or moan about my own books; regardless if you think mine are good or not, there are many awesome authors out there smothered by the way the system is weighted against them. And it sucks. So if you’ve got a fav author out there, big or small, show them some love. It’s the only way they’ll be able to keep doing what they love.

Facebook Twitter Google-plus Instagram Tumblr
Become a Patron for $1 & get access to the Patron's Only Library and more!
Ask me a question on Goodreads and check out all our books!
Liked it? Take a second to support Annathesa on Patreon!