In the middle of rearranging and tidying up her room, my Cupcake and I decided it was really a bummer that her bookshelf was so tiny. Books were stuffed in the little sling shelf’s two tiny rows ’til they stuck out at all angles like a little cactus of books with corners here and there, and papers sliding out between the covers as the shelf struggled to contain them. “It’s too bad we don’t have a bookshelf for you that’s big enough to hold all of your books.” I lamented as I eyed the woefully stacked library books in the corner, all dressed up with nowhere better to go.

My sister’s brother, who Cupcake has deemed “Uncle Dragon” for his tendency to attempt to devour her Cupcake-frosting (Her always brightly colored hair. His antics were directly responsible for her nickname as such.) wandered into the room and eyed the spot where the tiny bookshelf sat while still crunching on his cereal, bowl in hand.

Cupcake and I went on discussing solutions, pulling out stackable crates and trying to fit the overflow of her books into them and such, when Dragon disappeared for a moment and returned with a measuring tape. We blinked at him with amusement and confusion as he measured this way and that, then simply nodded and left the room without a word. Cupcake and I shrugged at each other. Dragons are weird.

An hour later, I wandered outside to grill up some burgers and found Dragon on the porch with a bookshelf he’d spontaneously created from spare wood he’d had lying around. Amused, I went about my business as he picked over the placement of shelves and dabbed up the dribbles of glue.

The bookshelf sat in the living room later that night on a drop cloth, glue drying, and Cupcake was virtually vibrating with excitement. “It needs a pretty color.” I supplied as we all stood around admiring the Dragon’s creation. “RAINBOW SPARKLES!” Cupcake insisted. Then we all had to explain to her how difficult it would be to paint the bookshelf in rainbow colors. We settled on purple instead because if you can’t have rainbow sparkles, at least you can have purple.

The next day, we went the store for paint and a brush, then came home with our supplies and set to painting the bookshelf. It took us several hours of work, my brush for the broad shelves and Cupcake’s brush for the little edges, but two coats later, the bookshelf was purple and Cupcake’s excitement had elevated itself to a near-constant hum of energy, complete with little squeaks.

“It needs something more.” I decided as I looked it over.
“SPARKLES!” Cupcake supplied once again.
I nodded. “And rainbows.” Her intake of breath was kind of alarming. She let it out in a long, happy squeal and I knew what I needed to do.

I dug out my craft paints and brushes, and especially my favorites: my glitter paints, and I sat down to work. I painted a little of this and a little of that, and just dreamed and imagined my way through the colors until something coherent came out. I’m not the best painter when it comes to physical paints. Most of my skill was honed with digital painting and I miss my undo button like crazy. But for a Cupcake’s bookshelf, it wasn’t so bad.

I painted my representation of my Cupcake reading, which of course means that all kinds of dreams and imaginings and wonders are coming from the pages before her because that’s what happens when you read. Everyone knows that. And sparkles make everything better.

Something I learned from this project is that it’s hard to photograph glitter paint. If you can’t move the light source around, the glitter doesn’t sparkle just right, and sometimes glitter even looks kinda dull and patchy without light on the shiny, pretty edges. So multiple pictures were taken in order to share the art with you, and you have to understand that the overall idea is far cooler than my skill would allow me to create. Regardless, here it is, and I hope you like it as much as I do, though I doubt anyone likes it as much as my Cupcake. 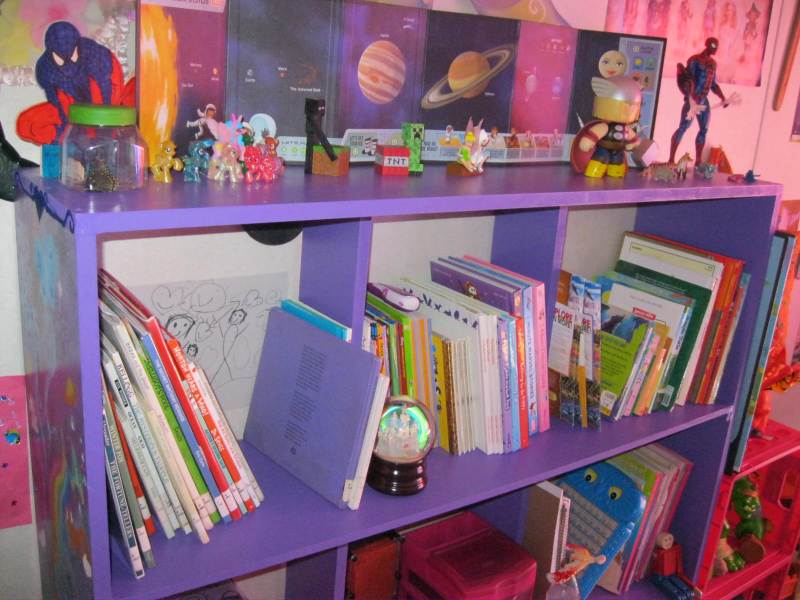 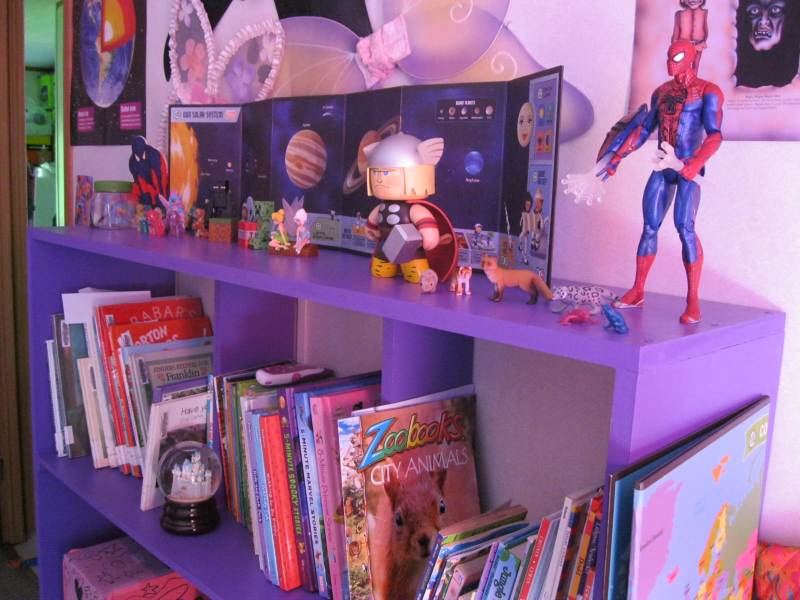 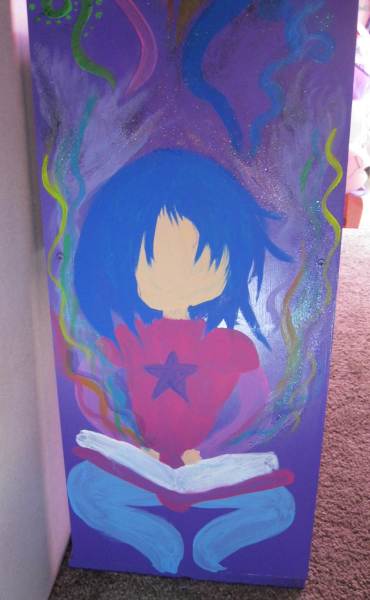 Thanks for reading!
Shei Darksbane

Liked it? Take a second to support Shei Darksbane on Patreon!

2 thoughts on “Cupcake’s New Bookshelf (Plus a little art.)”