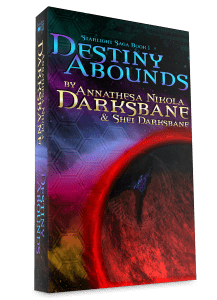 On the prison world of Urebai, a notorious Prisoner breaks free of her chains once more. On primeval Fade, a decorated warrior flees her home for the stars to escape her past. And under the light of a distant star, a solitary pilot prepares to make the ultimate sacrifice for her people.

This is how the tale begins.

Branwen Hawke left behind the swords and castles of her homeworld to take solace from the war that consumed most of her life. After stumbling into the role of captain of a one-of-a-kind starship with an unlikely crew, she must find a way to keep them together and thriving. But even with years of experience commanding troops, Branwen has her hands full with a lost pilot from a distant world, an engineer with crippling anxiety, an innocent young medic with a secret, a renowned Kala, and her insanely dangerous baggage.
Now tasked with an important mission that could make or break the crew’s reputation, Branwen must face her inner turmoil and find some sort of peace despite the struggles she can’t escape, while safeguarding the lives that have fallen so fatefully into her hands.

Publisher’s Note: This series is not finished. The author is working on this series along with her other current projects and will be releasing more titles in the series in the future.