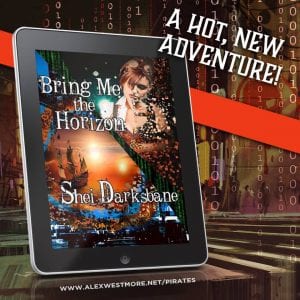 Beyond the Mire is a cyberpunk/dystopian pirate heist thriller with high fantasy elements (Yes, you read that right!) series by Shei Darksbane, written for the first ever LGBT Kindle World. Absolutely steeped in LGBTQIA+ representation in a flowing narrative, Beyond the Mire is being written as a series of novellas, one of which is available for purchase now, exclusively on Amazon.com. Pick up a piece of LGBT history today, starting with Bring Me the Horizon Part One.

“The book was great and it has all the ingredients for one [of] the best pirate books.”

“This story has you captivated from page one.” 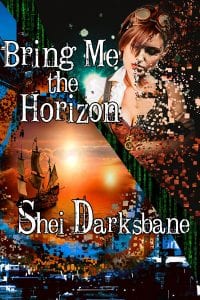 “I remember the sea.”

Captain Riven Grimrock of the good ship Rattledower was doing well for herself. She had a fine ship with the best crew in the lands, and the loveliest lass on her arm. The sea was fair, the wind in her favor, and the hold runneth over with the spoils of their brave exploits. But everyone has to sleep some time.
Outside the virtual fantasy world of Morana Ba’nile, Riv is just another jacker. One of the masses of desperately poor, struggling to survive in the shadows of the wealthy few. Everyone she knows, and everyone she’s ever known is just like her. The wealthy few have their towers, and the poor have their runoff beneath the grates of the upper streets.
Down in the Mire, the only thing worth living for is the one thing you can never have: escape.
That’s why the elite created Eternal Beyond, the hit fantasy cyber-reality game played by millions of jackers every single day. After all, no one can jack out of reality, but with Eternal Beyond, you can jack into a better one.
But Riv isn’t just any player, and “Ebb” isn’t just any game.
When Riv gets an offer for the score of a lifetime, she leaps into action with her IRL crew—a merry band of hackers of myriad specialties—to pull off the heist of the century. All they have to do is hack an unhackable system by breaking into an unreachable virtual space, and acquire information designed so that no chip or neural could hold it. If they succeed, they could buy their way out of the Mire, but if they fail, the system will fry their brains in their skulls.
No pressure.
And the only way into the system…
…is to play the game.

Set Sail for Adventure on the Virtual High Seas!